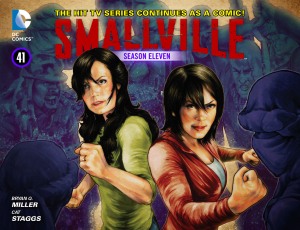 Valkyrie: Over the Atlantic Lois is flying out to Africa for an assignment (via plane), when a child inquires about how Superman is like, then the flight attendants, and slowly begins to see (if she didn’t already) that she is a celebrity mostly in part to the fact that Superman is tied to her name in more than one way. Then one of the flight attendants gets fresh. In London (not even sure why London I must of missed that somewhere) Perry White gets a call that Lois has been taken off the plane due to fighting the attendant, and the air marshal. She jokes about not worrying if she’s on the no fly list, “there’s always a safer way to travel”. Near Tinasha, Africa is where Lois begins her assignment about an “Angel of the Plateau” by asking U.N. soldiers. They respond by saying the vigilante is “unquestionably badass” they continue to explain that due to warlords taking children, villagers in return get protection, but the children don’t make it home when the angel strikes. Moments later their U.N. convoy is ambushed (of course it is…) and as the gunfight ensues Lois finds herself in mishap after mishap until finally her Angel arrives. Who turns out to be… Lana….? To Be Continued.

This is nit picking, but in the story, Lois goes on talking about her ass, then there’s clear ass shot (which in all 200+ episodes of Smallville, an ass shot was rare. There’s maybe 6 in all 10 seasons) AND IT’S THE FLATTEST ASS I’VE EVER SEEN.  Granted it’s a 2D medium, but there’s ways around that to give Lois SOME booty. Granted the Actor may not have much but you done changed up so much what’s wrong with giving her some real booty?

Anyway I FINALLY GOT MY PRAYERS ANSWERED! Cat Staggs does the interior for the book and its damn near amazing. I wonder if this was to “mimic” the last time we saw Lana, when she gets the suit she currently has on to save Lois. If I’m not mistaken, Allison Mack directed that episode and it was very pro female. The art work is very detailed and really captures the look of the actress’ faces in different situations. It’s a bit of a step forward in quality, but this doesn’t take away at all from the look of the Haunted arc Artist. The inker (if not Catt) did miss some spots. I can still see some sketch lines. Intended maybe, but it just looks cheap if that’s a style. I think I noticed a Mr. Terrific nod in the opening pages. I’m impressed with the look of her first interior work for the book. If she is on another book previously, then I’m sure others are used to this style but as a first time and, given her clear talent I’m a tad let down.

I like seeing this side to Lois, her bob. She often gets lost in the role of being the damsel in distress, to emphasize the love story between her and Clark. So her being away on a solo mission is dope. To what end obviously remains to be seen, but for what it’s worth, this is the best side story so far. It touches on the fact that everyone knows who she is and how important she is to the public’s impression of Superman, and how she deals with keeping his secret. Favourite part of the issue is Lana’s reveal. If it weren’t for the cover, you’d have never guessed it was really her.

Thank you for reading feedback is always helpful. Enjoy your Week! THAT’S IT! Cheers: “To Peace”. Your eLEWsive Thought Provided by: The “LEW System” – Xavier – @CoolyoNgeLEW