Its a dark world indeed.

I start with this. I enjoyed the movie. It was just kind of hard to.

Coming from Game of Thrones you would like to think the realm of GoT and Thor would blend seamlessly. Wrong. Now when I heard about this movie at first, it was addressed as being helmed by a female. Sometime later, Alan Taylor took over and gave us this. Now I still believe Taylor is capable of telling us a good story. Just don’t think it’s in a Marvel franchise. Be it direction or editing this movie was terrible.

Each actor felt and looked confused, and uninspired. Outside of Tom Hiddleston, he, as per usual stole the show in a creative way. His character and his style this time around, he displayed even more pain than we’ve seen him previously. A major part to his sadness is *SPOILER ALERT* is when his mother dies, and he’s loosely to blame.* this creates a great sadness and allows for the character to be seen in a slightly new light. A lot of Odin’s lines felt off. And that’s one aspect of the direction that failed me.

The story continues greatly from Avengers, in comparison to Iron Man 3, but it’s not the most direct follow up I would’ve hoped for. But come to think about it Marvel Comics never really did that after a big story arc… Always just kept it moving. One aspect of the overall plot was how involved the villain was. He wasn’t. His entire plot was handled wrong. He was kinda just there versus having reason to care about what he was doing. For an ancient evil with world domination goals, he didn’t seem to be explored as much as I would hope. In place of the villain absence, was the theme of brothers. Brothers at odds, trying to find a common ground. Accepting their “destiny”, if you will, as one being a hero and one the villain. That part of the story was well expected, well explored and well performed. 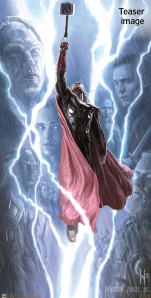 Let’s talk about the cinematography….. THIS WAS TERRIBLE. Did we learn nothing from Avengers?! And p.s. I watched this movie in a AVX theatre. Now while I criticize the way in which it was shot, I do appreciate the lessons it taught me. Don’t do an entire movie with elaborate sets if you can’t actually build majority of them. For a movie like this, I understand that it’s a different realm so it has potential to look different from the norm but the first movie has such a president that I thought would naturally transcend into the sequel. I felt a lot of parts that were heavy with green screen and/or cgi were so poor looking; it was almost embarrassing on behalf of Marvel as a brand. Key examples of this were when Loki was sentenced for his crimes.
In addition to that the switching from camera to camera was terrible.  The quality changes were so evident and vastly different from each other it became the way of a student project.

Bottom line: it’s not the worst ever movie, but as far as super hero movies go, I’m placing it for a tie with Dare Devil. Or maybe a tie with Iron Man 2, with an edge to Iron Man 2. Mark Millar tweeted that Thor (the first one) was the best of the phase 1 entries (avengers hadn’t come out yet) so this was theirs too lose. which they sadly did in my honest opinion.