I should listen to me own theoretical rules more often.

This is now the 3rd movie post Cameron,… I really wish they would stop butchering the franchise. I was all stoked for this but I just can’t shake the feeling that this was just another failed attempt at recreating the same lightening in a bottle that was brought on by the Canuck director. The first film was a huge success for many reasons. It was a made to be a horror film with ties to the sci-fi genre. The second is one of, if not the best, action movie of all time (Yes, even now). 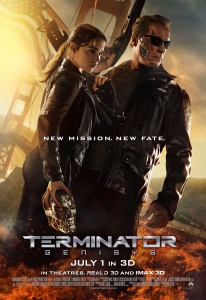 This movie seemingly came to light, as in its concept, right out of a scene in its own movie. Spoiler alert, it comes in the form of a what if (pay attention if you still plan on seeing it to the words what if). What if we could see how our fate turned out. What if we could know years in advance the day we were to receive our true love . As a parent, how would we feel knowing our child becomes the proverbial villain of the story. What if… It’s an excellent question to explore. Do you ally yourself with the child or do you debate how to end him or her? It’s a great question to ask a viewer. Now this would have been the seeds for a great movie if it wasn’t named Terminator.  It would also be better if it wasn’t written by someone who sounds like they only studied the originals and took a year if screen writing. At least the 3rd movie had a tad bit more depth in it. I mean come on. We know everyone who “owns” a ‘nator, tries to get him to fit in. We don’t need that explained. The story for me, dialogue wise and the rules of time and space continuum seemed like just something to be skipped over. Having Sarah Conner speaking like Edward Furlong like in T2 all over again was a weaker choice than the director.

Now I’m not knocking all his choices. But I feel like after we saw his big budget version of Thor in Thor the dark world we all agreed to just let him handle Game of Thrones and nothing else. Thor was one of his first outings since Thrones, and being what that was; him, being selected for this, was a shocker. I think I said that somewhere. I do applaud the key set designers and craftsmen who were able to create the world we were entering. But a set can only be a good as it’s utilized.  I did enjoy the makeup department in its accuracy, if he did have a hand in that then good choice. I like continuity. I will say the aspect of 3D was much better here than it was in his Thor film.

Han Zimmer wasn’t as strong this time around. The musical score just didn’t live up to the hype of the movie or the rep of the composer.

The new talent was interesting. I thought the humanizing of the robots was a relatively smart move but also what did the movie in. As I said earlier having robots just scare the crap out of you  is awesome, but so is knowing that a robot has justified reason to fear you. Some of the new talent were underused. I just wished we saw more of them as their potential to, at the very least, frighten, or lead ,or do anything, was very promising..

Bottom line.  It’s a creative look at all the elements and aspects asked but not explored in the predecessors, but ultimately it’s not something we needed to see on the big screen for the franchise. If they don’t show the future war in whatever comes next. Just don’t Watch it. No alternative story of a Conner being saved is needed. It’s all been done.

Theatres or wait for the blu-ray? Kinda cool in 3d, but if you can just rent it.

THAT’S IT! Cheers: “To Peace”. Your eLEWsive Thought Provided by: the “LEW System”