An interesting follow up from the ground breaking original that was turned into a major motion picture and a sequel that came out last summer (2013). Same creative team of Mark Millar and John Romita Jr. (JRJR)

I read this months before the sequel came out as that’s how it was produced initially. I enjoyed this quite a bit, and now with benefit of hindsight, can confirm it’s better than what was released on film.

Where this book shines is where JRJR does work. He’s great at making each character in a panel/frame as individual as his skill allows which is important to me. I can’t stand when I see an artist with talent make everyone with the same face (with exceptions like twins or something). Since World War Hulk and his tremendous run on Amazing Spider-Man, he is one of the best artists in drawing “destruction” scenes. In this book, being that it’s a realistic take on the medium almost within the medium(medium being comics), most of the destruction comes from human dismemberment, which I’m sure older/mature readers will appreciate. It’s something along the lines of Spartacus in terms of its gore. His splash pages are poster worthy and are usually seen towards the end of a chapter/issue. The overall feel is similar to the original so that is helpful, I did notice a more orangey hue to the book why I don’t know, maybe to compliment to the bravery of the title hero.

Millar has created a string of self invented stories, characters under his Millar World brand, but I don’t think any are as impressive as Kick-Ass (aside from “Superior). For readers of a more daring age or ones who support creator owned titles, or just like a different way from the big two (Marvel & DC) every so often, this is awesome. Painting a fan boys dream of how a typical modern day nerd really does think about doing from time to time. 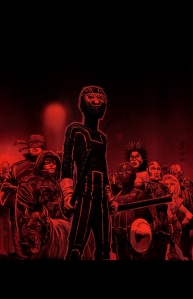 This isn’t one of those really porky individuals or one of those fashion nerds, this is a person who reads comics and said maybe it would be a cool idea to actually do some good in the Cosplay costume I wear to comic-cons. So the story takes place a couple months after the original, and it moves swiftly to the end. Of course it felt long as the issues came up, but the story is pretty fast paced. I’m sure in the movie version, some characters got expanded more than in the book, namely like, Ms. “Night-Bitch”. In the comic where I felt it was the biggest flaw was that most of these characters weren’t important other than really just having bodies to emphasize the scope of Kick-Ass inspired heroes. Again I would have loved to see his script in translation to JRJR’s art (I think the issues usually have those kind of special features). One of the things I love about this is he uses names in very humorous ways. Like when he made an Adam Huges reference I was very pleased because he was very accurate with it.

In an awkward way this was almost a Spider-Man story. It really shows the resilience of a character to do something despite all the personal pain you might go through. It’s not the most self inspiring story but, it does have a lot more personal pain in this. We all have those days when we don’t feel well so we won’t go into work or go to church or a particular event. He literally has no powers, but he just wanted to make those heroes, that he reads, proud. I think, on the surface anyway, the core of the book is about giving your word, keeping it against everything and anything, and taking a lot of pride in it. That alone, is something this world seems to lack in men these days. And trust me, A LOT HAPPENS to Millar’s created heroes.

With that said it’s a worthy pick up in graphic novel form, or as a rarity item, as issues. 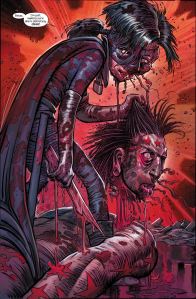 Thank you for reading feedback is always helpful.

THAT’S IT! Cheers: “To Peace” . Your eLEWsive Thought Provided by: the “LEW System”
– Xavier – @CoolyoNgeLEW

*NOTE*
I will be reviewing the comic soon.

Well after a director change with Jeff Wadlow, the sequel to the Matthew Vaughan directed Kick-Ass 2 is upon us.

I won’t make any comparisons in terms of quality or make any direct links to the comic, but understand that this is one of those films that made the comic book look way better.

My flaw with this film is that it didn’t ever seem to get on with the story. Yes it progresses but it just seems like one big catch up story versus just telling us another day in the life of Kick-Ass.

The theme this time around seemed to be about fitting in and making the hard versus right choices. Not terrible ideas given the source material, and something that so many of us have to deal with, depending on the occasion. They were able to capture that idea very strongly and in the foreground with how Hit-Girl’s story moves along.

With a slew of new actors and characters, there isn’t much screen time for each new character to really want to care about them. So I would have loved to have seen more stories for Jim Carey’s character. Which reminds me, each character seemed to be more of an origin almost as if to do spinoffs. The two leads give a somewhat decent performance with the slant on hit Girl. Aaron just felt flat and very whiny be it in the script or not, it really just came off as annoying.

The highlight action scene was with Mother Russia early on. She commanded a lot more respect as a character as did the violence and comic book lore fans would live for.

I might be nitpicking but I couldn’t stand that most of the characters kind of just had a totally different costume than from what was in the comics. It’s not far removed but it’s not really any kind of improvement either.

Bottom line: There’s not much to really like with this film, everyone will see it differently. But as far as I’m concerned this was a movie that needed Matthew Vaughan for it to be worth a damn. It’s definitely not worth price of admission. Maybe when I read the comic it will make more sense.

The Hunger Games: Catching Fire begins as Katniss Everdeen has returned home safe after winning the 74th Annual Hunger Games along with fellow tribute Peeta Mellark. Winning means that they must turn around and leave their family and close friends, embarking on a “Victor’s Tour” of the districts. Along the way Katniss senses that a rebellion is simmering, but the Capitol is still very much in control as President Snow prepares the 75th Annual Hunger Games (The Quarter Quell) – a competition that could change Panem forever.

Insidious: Chapter 2
The famed horror team of director James Wan and writer Leigh Whannell reunite with the original cast of Patrick Wilson, Rose Byrne, Lin Shaye, Barbara Hershey and Ty Simpkins in INSIDIOUS: CHAPTER 2, a terrifying sequel to the acclaimed horror film, which follows the haunted Lambert family as they seek to uncover the mysterious childhood secret that has left them dangerously connected to the spirit world.

Kick-Ass 2
The costumed high-school hero Kick-Ass joins with a group of normal citizens who have been inspired to fight crime in costume. Meanwhile, the Red Mist plots an act of revenge that will affect everyone Kick-Ass knows. Kick-Ass 2:

The Mortal Kombat Legacy continues in Season 2 as Liu Kang, Kung Lao, Kenshi, and Ermac join the ranks. The rivalries and histories of these fierce warriors will unfold as Raiden and his recruits clash against the dark forces of Outworld. The epic battle for Earthrealm has finally begun.